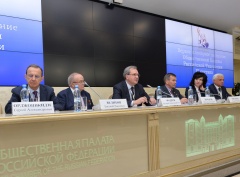 The members of the new composition of the Civic Chamber will put emphasis on charity, social responsibility, volunteerism, patriotic education and youth, as well as on protection of citizens' rights.

Elena Alshanskaya, member of the RF Civic Chamber, proposed to use the RF Civic Chamber as a platform for communication, collecting and voicing citizens’ feedback. In her opinion, it is the lack of high quality feedback that is one of the main problems today.

"Why are governmental programs often inefficient? Because the state bodies have not yet learned to collect this feedback, to react and to correct some tactical moments. We should concentrate as much as possible on monitoring of government bodies and collecting feedback from our citizens, NGOs and regional civic chambers", - Alshanskaya said.

Ruslan Salyukov claimed that today the Civic Chamber of the Russian Federation is the only institution which could be easily reached by an ordinary person: “The population associates the RF Civic Chamber with solution of specific problems. Everything depends on our personal involvement. For example, can we really let the only single hospital in a district of some region to be shut down?”

Svetlana Razvorotneva expressed her readiness to support citizens in the field of housing services.

"As part of our activities, we must constantly keep a close watch on the implementation of governmental programs, trying to be ahead of the federal agenda, including the way how resettlement from emergency housing is carried out", - Razvorotneva added.

Volunteerism will also remain an important aspect of the Chamber’s activity. Artem Metelev outlined the plan of development of the volunteer movement and highlighted one of the key problems related to the perception of volunteers: "Often officials do not understand what is the point of volunteers. The distance between them should be reduced".

A great attention of the renewed Chamber should be paid to engagement of citizens in  development of urban environment and rural areas. The Commission on territorial development and local government has been established for the first time. Chairman of the Commission Andrey Maximov stressed the importance of bringing the issue of urban space development to a new level.

Julia Ogloblina elaborated on rural areas and local youth: "Unfortunately, NGOs do not always manage to establish cooperation with public authorities. And I think that it is necessary to train not only activists, but also officials themselves, because local authorities often do not have the right understanding, desire or time to communicate with young people, although everyone says that the future belongs to the youth. We identify the best active young people, but their projects receive insufficient replication among the rural dwellers, and we need support in that".

Maxim Grigoriev, member of the RF Civic Chamber, made a briefing on the practice of elections’ monitoring initiated in the RF Civic Chamber several years ago and to be continued. He proposed to set a working group or a coordinating council in order to be able to observe elections in all regions. He also mentioned counteraction to the terrorist threat and, in particular, the book "Counteraction to terrorist propaganda".

The issues of an accessible environment for physically challenged persons, monitoring of the laws’ implementation, elaboration of a civil society development strategy also remain priorities in the activities of the Civic Chamber of the Russian Federation.