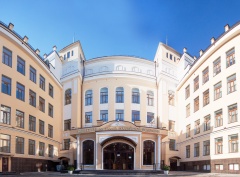 Three members from each of the 13 directions of activity have been elected to incorporate the RF Civic Chamber (four members in the nomination “Public control”).

43 public figures, elected from more than 400 candidates who submitted their applications and representing the interests of civil society, were approved as members of the RF Civic Chamber for the next three years.

In the near future, the first plenary session of the RF Civic Chamber will be held. The first session is to elect the President of the Civic Chamber and to establish commissions of the Chamber.

1)    Albina Dudareva – founder and Chairwoman of the Coordinating Council for the development of the waste management sector of the Association for Interregional Social and Economic Cooperation "Central Federal District"
2)    Igor Chestin – Director of the World Wildlife Fund (WWF Russia)
3)    Dmitry Nosov – bronze Olympic medalist in judo, Chairman of the Board of the charitable foundation for physically and morally healthy generation "Dmitry Nosov Foundation", founder and leader of the all-Russian public anti-drug movement "AntiDiler"

Engagement of citizens in development of urban environment and rural areas

1)    Alexander Shipulin – Deputy Chairman of the Council of the Association of Farms and Agricultural Cooperatives of Russia
2)    Julia Ogloblina – Chairwoman of the Central Council of the all-Russian youth public organization "Russian Union of Rural Youth", member of the Central Staff of the all-Russian public movement "Popular Front For Russia”
3)    Vadim Zharko – Director for Development of the autonomous nonprofit organization "Center for Applied Research and Programs"

1)    Sergey Shchetinin – Chairman of the Executive Committee of the all-Russian public organization "Russian Union of Rescuers"
2)    Olga Amelchenkova – Head of the all-Russian public movement "Victory Volunteers"
3)    Sergey Rudov – member of the 4th and 5th convocations of the RF Civic Chamber, Chairman of the Board of the Association of Philanthropists "Beliy Tsvetok", Social Projects Coordinator in the international volunteer project “Volunteer Army", Orthodox Help Service "Miloserdie"

Support for family, children and maternity, interaction with youth

Harmonization of interethnic and interreligious relations, support of civil peace and consent

1)    Maxim Grigoriev – Director of  the Fund for Democracy Studies
2)    Svetlana Kuznetsova – representative of the international union of public associations for preservation and development of social, cultural, spiritual and moral traditions "Leaders of the World Community"
3)    Oleg Goncharov – representative of the all-Russian public organization "Russian Association for the Protection of Religious Freedom"

Development of the information society, mass media and mass communications

1)    Elena Volova – Head of a branch of the Civil Society Development Foundation
2)    Gleb Kuznetsov – Director of the "Petropavlovsk" Fund for support of social projects and programs
3)    Ilya Remeslo – Head of the public organization for promotion of legal culture and protection of lawyers community’s interests "Association of Lawyers of St. Petersburg".

Development of culture and creativity

1)    Andrey Dementiev – poet, political observer in the Radio of Russia (VGTRK)
2)    Vyacheslav Lashchevsky – Vice-President of the Russian Association for Public Relations
3)    Denis Kiris – Chairman of the Board of the Interregional Independent Trade Union of Theater and Film Actors

Development of education and science

Development of entrepreneurship and the real sector of economy

1)    Ilya Semin – Director of the Monitoring Centre for Industry Development, Vice-President of the “Business Russia” NGO, member of the Expert Council of the National Rating of Investment Climate in regions of the Russian Federation, member of the Public Council under the Ministry for the Development of the Far East
2)    Elena Milto – Chairwoman of the Yaroslavl Regional Public Organization "Union of Young Entrepreneurs"
3)    Olga Golyshenkova – President of the Association of citizens and organizations for corporate education development "MAKO" (International Association of Corporate Education)

Development of the sphere of services, consumer market and housing and communal services

1)    Svetlana Razvorotneva – Executive Director of the National Center of public control in the sphere of housing and communal services
2)    Artem Kiryanov – lawyer, Chairman of the Lawyers Association "Kiryanov and Partners", member of the Interdepartmental working group on housing and public utilities under the General Prosecutor's Office of Russia
3)    Pavel  Prigorodov – Director of OOO PRiG, Chief Editor of the newspaper “Upavdom”

Social policy and labour relations, interaction with trade unions and associations of workers