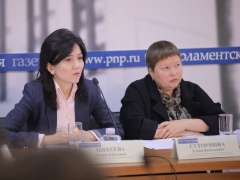 On May 26, during the "zero reading" of the bill "On the experiment of the resort infrastructure development in the Republic of Crimea, Altai, Krasnodar and Stavropol Region", which was held in the Parlamentskaya Gazeta media agency, Lydia Mikheeva, Vice-President of the RF Civic Chamber, noted that, according to the opinion prepared by the Expert Analysis Center under the Civic Chamber, the negative perception of the resort fee by the Russians is not only related to its size, but also to the very fact of its introduction.

"Why should we pay, if there is no infrastructure, order, cleanliness, toilets, umbrellas on the beach? Where will this money go? - the Russians wonder. – It’s up to representatives of the authorities to answer these questions at first", - Lydia Mikheeva said.

The Civic Chamber’s Commission on Public Diplomacy and Support for Compatriots Living Abroad also does not support the bill, as stated by Elena Sutormina, Chairwoman of the Commission.

“The law needs to be reworked dramatically, because, firstly, it does not include all categories of beneficiaries. Secondly, the very scheme of its collection is not transparent, and it is not clear which fund will accumulate the fees and how they will be spent, so we have suspicions regarding corruption elements of this scheme ", - Sutormina said.

In addition, she recalled that the Russian Federation already had a negative experience with the introduction of the resort fee. This attempt had failed, as all the income from the resort fee was spent on its administration.

"Finally, we believe that the adoption of the initiative will reduce the tourist flow to the regions where the experimental resort fee will be introduced. And eventually, tourists will prefer Turkey or Egypt which offer cheap vacations", - she emphasized.

So, Elena Sutormina and Lydia Mikheeva expressed serious fears of experts that adoption of a tourist fee accounting for 100 rubles per day for the objectives of the resort infrastructure in the Republic of Crimea, Krasnodar, Altai and Stavropol Region may prove to be unaffordable for the Russians in the current economic situation.

Members of the RF Civic Chamber said that the Civic Chamber of the Russian Federation will collect comments on the resort fee bill until June 8 and forward them to the State Duma and to the Federation Council.

It should be noted that the Russian Trilateral Commission on the Regulation of Social and Labour Relations also opposed the bill on the resort fee in Russia. Members of the commission including the Russian Union of Industrialists and Entrepreneurs (RSPP) and the Federation of Independent Trade Unions of Russia (FNPR) explained their criticism by the fact that the tax for holidaymakers at resorts will detain the development of domestic Russian tourism.

* The bill on the resort fee was prepared by the Ministry of North Caucasus Affairs of the Russian Federation. If the document is accepted, since January 2018 tourists visiting the resorts of Crimea, the Altai, Krasnodar Region and Stavropol Region will be taxed.