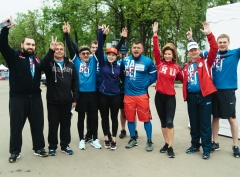 Members of the RF Civic Chamber Sultan Khamzaev and Veronika Krasheninnikova took part in the All-Russian half-marathon for amateurs and professionals under the slogan “For Running”.

In Moscow the track was mapped in the most picturesque esplanades of the city, such as Luzhnetskaya, Frunzenskaya and others. The organizers proposed to choose among four  distances (21, 10, 5 and 3 km).

The Moscow running was also attended by counselor to the Minister of Defense Andrey Ilnitskiy, head of the Military Academy of the Russian Strategic Missile Forces Sergey Siver, spaceman Hero of Russia Maxim Suraev, member of the Council of the Federation, Olympic champion Tatiana Lebedeva and other politicians, public figures and stars.

«We witnessed that development of mass sports in Russia is a priority matter which benefits from a comprehensive governmental support. I am particularly happy that mass sports events engage more and more young people and families with children. Marathons go without winners or losers. Each participant has won the victory at least of his or her own laziness and strengthened his or her health!», — Sultan Khamzaev said.

He also highlighted the importance of promotion of such initiatives in various regions and small cities of Russia.