Thanks to the participation of a member of the Civic Chamber of the Russian Federation, a public council was established at the reserve 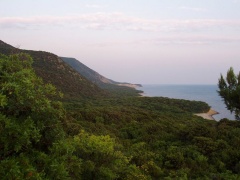 The State Natural Reserve of Federal significance “Utrish” was established in 2010 to preserve and restore the biodiversity of the Black Sea coast's unique ecosystems — dozens of plant species listed in the Red Book of Russia.

On August 24, 2020, there was a fire in the area between Bolshoy and Malyi Utrish that destroyed 130 hectares of unique relict forests in both the regional reserve “Abrauskiy” and the federal reserve “Utrish.”

The public, led by the Nature Conservation Commission of the Krasnodar Regional Branch of the Russian Geographical Society with the support and participation of the Reserve's management, as well as the Civic Chamber Commission on Ecology and Environmental Protection, proposed to include additional territories in the Reserve. In autumn 2020, Veniamin Kondratiev, Governor of the Krasnodar Territory, sent this proposal to the Ministry of Natural Resources and Environment of Russia.

There have been repeated meetings in the Civic Chamber of the Russian Federation devoted to the development of the system of specially protected natural areas, with the participation of heads of protected areas, as well as representatives of the Ministry of Natural Resources of Russia. They again raised issues of conservation and development of the territory of the Utrish reserve. On 5 March 2021, a decree of the Russian Federation's Government to increase the territory of the reserve by 6.4 percent was issued.

Irina Sannikova, the Member of the Civic Chamber Commission on Ecology and Environmental Protection, said: “We were proactive: the attention of our Commission together with the Reserve's staff and the Krasnodar Branch of the Russian Geographical Society to this issue gave additional impetus and accelerated the decision-making process.”

Besides, on the initiative of Irina Sannikova, a public council was created at the reserve, which, together with residents and active citizens of the region, will look for models of eco-tourism development and biodiversity conservation in the Utrish Protected Area.

“Formation of the Public Council of the Nature Reserve ‘Utrish’ is an important and timely step to unite the efforts of the environmental public and the reserve management in the conservation of this unique natural area, the development of ecological tourism, the organization of environmental education activities. The creation of such councils, including those under individual protected areas, is of paramount importance for a constructive dialogue between the authorities, the public, and business in the conservation of protected areas. We save for people and together with people!” said Irina Sannikova.